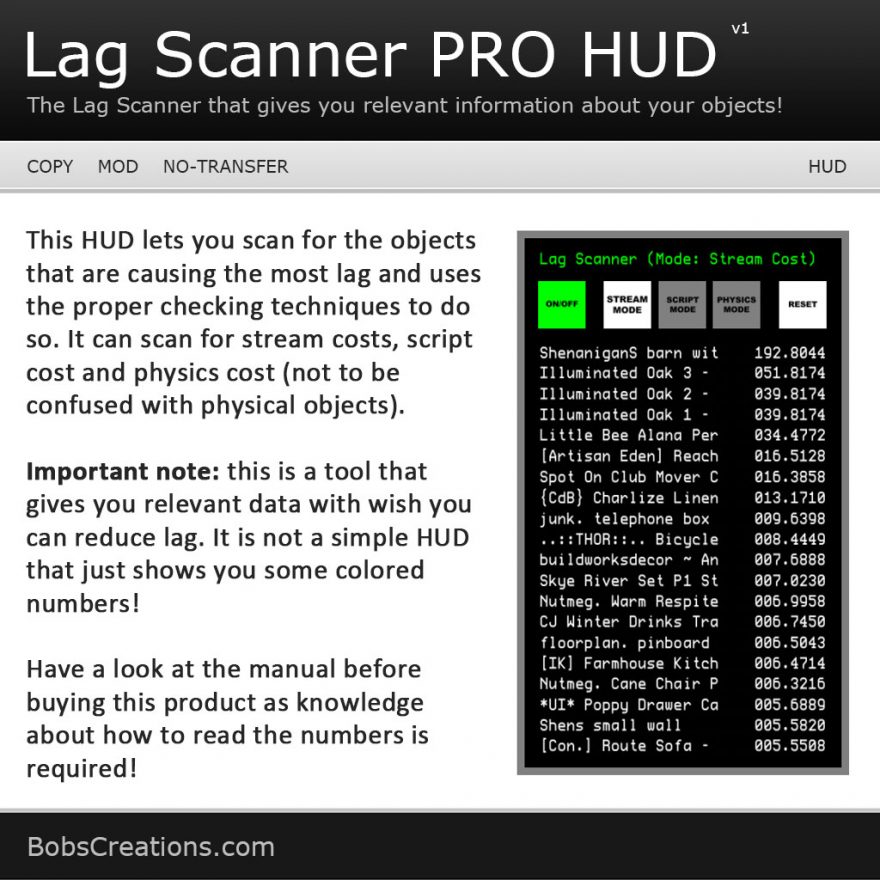 The Lag Scanner PRO – HUD is the first HUD that actually gives you relevant information about lag and lets you reduce lag at your location.

It does however require you to understand a few things to be able to use the HUD effectively as it is not just a gadget that simply shows you some numbers and colors.

The Lag Scanner PRO – HUD uses proper checking techniques that provide you with relevant data. Just knowing how much script memory a object uses is not all that relevant as one simple mesh building can easily generate 1000x more lag then one single script. So if one would only check for script memory, and would reduce this, one would have little to no noticeable results. Hench why we scan for “relevant data” and not irrelevant data such as script memory.

One super important thing you need to understand is that this HUD by itself says nothing. Just because a item shows a high number doesn’t mean that its lagging your sim/location. Technically it is but well, obviously a empty sim is less laggy then one with items in it.

It is all about the total. If you have a relatively clean area with just one “laggy” building then it wouldn’t matter because the total is not enough to result in a lagging sim/location. On the other hand, when on top of this you have 10 more buildings and hundreds of decor items then these numbers start to mater.

What does this mean? Well if you look at the product picture at the top of the page you can see on the HUD a item called “Illuminated Oak…..”. The first one in the list with 192 is to be expected as its a large mesh building. But the Illuminated Oak is a issue as the sim where i made this scan is full with them (many more as shown on the HUD). To be clear we are talking about trees here. Sure they look nice but for trees that decorate the sim this is way to much. So one great way to drastically reduce lag on this sim is to replace those trees for ones that take a lot less Streaming cost. For comparison, i have large tree groups in front of my shop that use 6 streaming cost (6.5 times less streaming cost).

The HUD gives you the facts, the numbers. It is up to you on how to reduce the lag. Just remember. We are working with real numbers and are looking for a REAL SOLUTION and im not giving you some fake numbers and telling you what is causing lag and what is not. Fact is, lag isn’t as simple as just picking up some prims or checking script memory.

Simplified: Every time someone comes to your sim/location. Data needs to be send to that visitor, causing work for the sim. The more avatars and work the sim has to do, the more lag.

Streaming cost in a nutshell shows you how much lag a object creates. Larger objects or large link-sets obviously have a much larger number than simple prims or meshes. Streaming costs also includes scripts in its calculation. So if you have a single prim box with many scripts in them you will see them with a much larger streaming cost in comparison to a single prim without any script (wish is bellow 1.0 and doesn’t show on the HUD).

Numbers over 100 are fine for large mesh buildings (assuming you don’t have that many of them rezzed). But if you have a area filled with for example plants or small things that have such a large number you will run into issues.

Also do not forget that the HUD scans for object. If you have roads on your sim that consist of simple prims they most likely wont show up on the HUD. However if you link all your roads together into one linkset then most likely it will. This doesn’t mean that there is more lag (its just means you get a sum up of all those items).

TIP: Wear the HUD and have a walk around my store. The list should be relatively clean as my vendors wont show up in the HUD (and yes this matters as i have more then 150 vendors rezzed). You will see that the amount of items above 2 is fairly limited. Resulting in a low lag store. The items that however do have a higher number are more complex items or have quite complex (but low lag) scripts in them.

Simplified: Script MODE shows you how many seconds a script delays the sim’s script response in seconds. We are looking at fractions of a second here but a fraction of a seconds is a lot and it adds up fast. A number like 0.000010 is actually quite high.

The HUD will only show items with script that have a higher script time then 0.000001. Simple scripts like landmark givers, or properly scripted vendors will not show up.

Also relevant is if the script is doing something when it is being detected. Vendors for example might sometimes show up when they are being scanned while they are updating. This HUD for example has a number of 0.000004 when it is turned off but can go over 0.000060 when its on and collecting prim data.
On a side note do keep in mind that this is a complex HUD with 7 scripts in it.

Again, just as with streaming costs. The total is what matters. However any script with a number over 0.000100 we may consider as a laggy script.

Simplified: Physics MODE shows the costs of a object if it would be made (or is) physical.

This option is there when you need it, but generally not very useful unless you have physical items rezzed. The numbers it gives you on none physical objects is not very relevant. For none-physical items stick to Stream Mode.

The HUD will show items with a physics cost higher then 2.0.

What the HUD doesn’t scan

The HUD only scans object and not avatars! A product that scans avatars will be made available soon. Avatars may have a huge impact on lag as well. Especially in regards to connection and graphics lag.

The HUD works by scanning objects around you. You will need to turn the HUD on, set a mode and start walking around. While you walk around the HUD will collect data. You can click on of the items in the list for more information and its exact map location to help you find it if the name isn’t enough.

Its recommend to do a walk-through of your area in Stream and Script Mode.